Global Experts Meeting on Frontiers in Gynecology and Obstetrics has been rescheduled to September 20-22, 2021 in San Francisco, USA due to unforeseen circumstances coronavirus disease (COVID19) pandemic Gynecology congress 2021

Depression common in lead-up to menopause, but few gynecologists screen for it

Even though studies have shown that some 40% of women experience depression as they go through menopause, more than a third of gynecologists don’t screen for it, a survey finds.

While most of the gynecologists surveyed said they believed they could recognize depression in perimenopausal women, almost half did not feel confident in their ability to treat depressed patients, according to the report published in Menopause.

The new findings suggest gynecologists need more training in diagnosing and treating depression, said the study’s lead author, Greta Raglan, an assistant professor in the psychiatry department at the University of Michigan. “And for the consumer, it’s important to understand that the risk for depression is higher during the perimenopausal period,” Raglan said.

Because doctors may not be screening for depression, it’s important for a woman to know the symptoms, which can be different during menopause, Raglan said.

Among the signs women should look out for are: lower than usual mood, less interest in activities that typically give one pleasure, difficulty falling asleep and staying asleep, having feelings of guilt or worthlessness, changes in energy level and thoughts of suicide or death.

To see how many gynecologists were screening for depression in their menopausal patients, Raglan and her team reached out to members of the Collaborative Ambulatory Research Network (CARN), a group of gynecologists who have volunteered to participate in surveys on a regular basis without compensation.

Invitations to take the depression survey were sent to 500 CARN members who were also members of the American College of Obstetricians and Gynecologists, and 206 opted to participate. The researchers pruned that number down to 197 after excluding physicians who only treated pregnant women, were retired or did not complete the survey.

Just over half, 55.8%, of the doctors said they felt confident in their ability to treat depression in menopausal women.

The new findings didn’t come as a surprise to Dr. Katherine Scruggs, an assistant professor of obstetrics and gynecology at Magee-Womens Hospital in Pittsburgh who wasn’t involved in the study. “Training in menopausal issues is generally lacking in residencies,” Scruggs said.

With the shortage of mental health providers it would make sense for gynecologists to get more training in diagnosing and treating depression in menopausal women, she added.

Gynecologists are often the first, or even the only, doctor women go to see, said Dr. Elissa Gretz Friedman, director of the Menopause Center at Mount Sinai in New York City, who also wasn’t involved in the study. 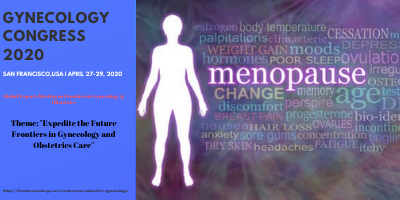 New study highlights prevalence of PTSD among obstetricians and gynecologists

A new University ofLiverpool led study, published in BJOG: An International Journal of Obstetric and Gynecology today, has revealed the prevalence of work-related post-traumatic stress disorder (PTSD) among obstetricians and gynecologists.

The study, funded by medical research charity Well-being of Women and the Royal College of Gynecologists (RCOG), highlights the need for a system of care for front-line staff and mental health in the profession as a global concern.

The impact of doctors' work on their mental health is a major global concern. Doctors can be exposed at work to events that they find traumatic, and obstetricians and gynecologists may be particularly at risk. Whilst the majority of births proceed straightforwardly to positive outcomes, adverse events in which a previously healthy mother or her baby is suddenly at risk of serious injury or death will occur.

Exposure to trauma through the provision of care can lead to work-related post-traumatic stress disorder (PTSD). This is defined as a psychological response to exposure to an event involving actual (or threatened) death or serious injury and characterized by four symptom groups: intrusions (e.g. intrusive thoughts or images, flashbacks); avoidance of reminders; arousal (e.g. feeling 'on edge') and negative alterations to beliefs or mood (e.g. anger, guilt).

These symptoms cause distress, impairment in the individual's social interactions, capacity to work or in other important areas of functioning. 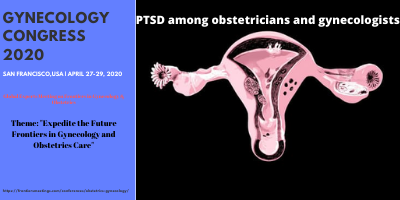 Women with uterine fibroids who used elagolix with add-back therapy saw a reduction in heavy menstrual bleeding. Abnormal bleeding is 1 of the most common indications of uterine fibroids and hysterectomy in the US, lead investigator William Schlaff, MD, a reproductive endocrinology and infertility physician at Jefferson University, told in an interview. The oral dose of elagolix with hormonal add-back therapy had a better effect than injectable medications. Schlaff and colleagues from academic medical institutions across the US conducted 2 identical, double-blind, randomized, placebo-controlled, six-month phase 3 trials—Elaris uterine fibroids 1 (UF-1) and 2 (UF-2). The investigators evaluated the safety and efficacy of elagolix at a dose of 300 mg 2 times a day with hormonal add-back therapy in women with bleeding due to fibroids. In roughly 70% of women, elagolix reduced abnormal bleeding, Schlaff said. UF-1 and UF-2 each consisted of a 2.5–3.5 month screening period, a six-month treatment period, and a twelve-month follow-up period. The investigators randomly assigned the women to either receive a 300 mg dose of elagolix with add-back therapy twice a day, a 300 mg dose of elagolix alone twice daily, or placebo in a matched, double-blind, double-dummy manner. The primary end point of the research was menstrual blood loss < 80 ml during the final month and at least a 50% reduction in menstrual blood loss form baseline to the last month. Some secondary end points included the change in menstrual blood loss from baseline to the end, the percentage of women who had suppression of bleeding at the end of the study, and the change from baseline in blood loss at 6 months. Eligible women were premenopausal, between 18–51 years old at the time of screening, and had ultrasonography-confirmed uterine fibroids and heavy menstrual bleeding diagnoses. Women reported their symptoms over the previous 4 weeks on the Uterine Fibroid Symptom and Quality of Life questionnaire. The questionnaire included a symptom severity score (0–100; higher scores indicated increased severity) and a health-related quality-of-life total score, which was the sum of scores on 6 subscales—concern, activities, energy and mood, control, self-consciousness, and sexual function. The scores ranged from 0–100, with higher scores associated with a better quality of life. 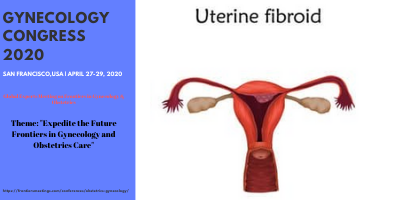 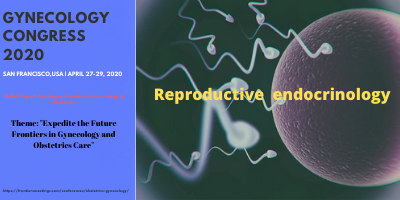 Transparency Market Research (TMR) has published a new report titled, “Gynecology Drugs Market – Global Industry Analysis, Size, Share, Growth, Trends, and Forecast, 2018–2026”. According to the report, the global gynecology drugs market was valued at US$ 53.376.96 Mn in 2017. It is projected to expand at a CAGR of 5.5% during forecast period. The global gynecology drugs market is anticipated to be driven by rising incidence and prevalence rate of gynecological diseases during the forecast period. The gynecology drugs market in Asia Pacific is expected to expand at a high CAGR of 6.3%, due to the high prevalence of diseases, improvements in the health care sector, and increasing focus of key players on business expansion.
Worldwide increase in the prevalence of gynecological disorders
Gynecologic disorders affect the female reproductive system. The most common symptoms of gynecologic disorders include pelvic pain, vaginal itching, vaginal discharge, abnormal vaginal bleeding, and breast pain and lumps. The significance and severity of these symptoms often depend on age, as these symptoms may be related to hormonal changes that occur with aging.
Among other prominent gynecological diseases, sexually transmitted disease (STD) is the most common and critical – the most common STD among women is pelvic inflammatory disease. In the U.S. alone, more than one million women suffer from this disorder in their lifetime, followed by chlamydia – a sexually transmitted infection of the vagina, which, if left untreated, develops into pelvic inflammatory disease. Gynecological disorders may or may not be related to the menstrual cycle, which prominently include menstrual cramps and endometriosis (abnormally located patches of tissue that is normally located only in the lining of the uterus). Additionally, gynecological cancers are also common among women around the globe. Endometrial cancer and ovarian cancer are highly common among women. Therefore, increase in the prevalence of the conditions mentioned above, are likely to increase the uptake of gynecology drugs.
Rise in number of women facing menopausal conditions
Rise in number of women facing menopausal condition is a major factor that is expected to drive the market during the forecast period. Menopause is defined as permanent cessation of menstruation, resulting from loss of activity of ovarian follicles. In a majority of women, menopause is a natural event occurring at the age of around 51.3 years. The number of women entering menopausal condition is increasing year on year, due to unhealthy lifestyle and different environmental factors. In Canada, presently, over five million women aged between 45 and 65 have either gone through menopause or are expected to soon go through menopause. The average age of menopause in Canada is 51 years. Moreover, according to the Society of Obstetricians & Gynecologists of Canada, around 80% women claim to suffer from at least one menopausal symptom including mood swings, irritability, interrupted sleep, hot flashes, and vaginal dryness. Incidence of menopausal vasomotor symptoms has risen significantly in the last few years, which in turn drives the global gynecology drugs market.
For more information regarding Gynecology Congress 2020  during April 27-29, 2020 at San Francisco,USA.
PS: https://frontiersmeetings.com/conferences/obstetrics-gynecology/
Email: gynecologycongress@frontierscongress.com

Cervicalcancer is a cancer arising from the cervix. It is due to the abnormal growth of cells that have the ability to invade or spread to other parts of the body. Early on, typically no symptoms are seen. Later symptoms may include abnormal vaginal bleeding, pelvic pain or pain during sexual intercourse. While bleeding after sex may not be serious, it may also indicate the presence of cervical cancer.

Humanpapillomavirus infection (HPV) causes more than 90% of cases most people who have had HPV infections, however, do not develop cervical cancer. Other risk factors include smoking, a weak immune system, birth control pills, starting sex at a young age, and having many sexual partners, but these are less important. Cervical cancer typically develops from precancerous changes over 10 to 20 years. About 90% of cervical cancer cases are squamous cell carcinomas, 10% are adenocarcinoma, and a small number are other types. Diagnosis is typically by cervical screening followed by a biopsy. Medical imaging is then done to determine whether or not the cancer has spread.

HPV vaccines protect against two to seven high-risk strains of this family of viruses and may prevent up to 90% of cervical cancers. As a risk of cancer still exists, guidelines recommend continuing regular Pap tests. Other methods of prevention include having few or no sexual partners and the use of condoms. Cervical cancer screening using the Pap test or acetic acid can identify precancerous changes, which when treated, can prevent the development of cancer. Treatment may consist of some combination of surgery, chemotherapy, and radiation therapy. Five-year survival rates in the United States are 68%. Outcomes, however, depend very much on how early the cancer is detected. 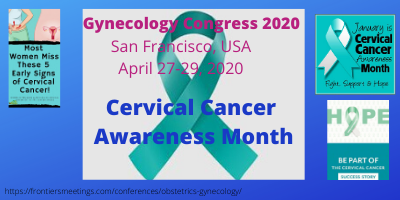 Gynecology Congress 2021 Global Experts Meeting on Frontiers in Gynecology and Obstetrics has been rescheduled to September 20-22, 202...